Culottes… chic or man-repelling, which camp are you in?

Culottes…..an odd choice for a first blog perhaps. But pretty fitting given I was inadvertently ahead of the fashion curve on this one, being as they were my secondary school uniform throughout the majority of the 90’s!

Here I am on the left (sorry Sue!) 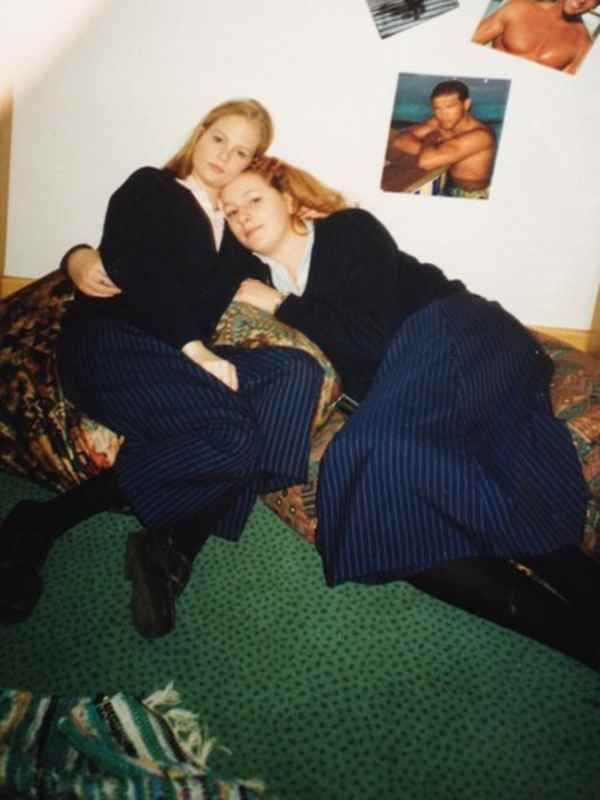 I have to be honest I absolutely hated them. They were deemed a “sensible” choice for a former boys school which had recently opened its arms to allow the fairer sex to grace its hallowed turf – for that read totally and utterly un-sexy for these were not quite the culottes you see on the current catwalks, these were practically to- the-floor, shapeless and billowing. Well the headmaster got it right: they were designed not to betray a hint of a shape; you could have hidden several bottles of wine up each leg and nobody would have known.

Unfortunately, they weren’t practical in the slightest either. Try breaking into a run and when you are hitting your top speed, your foot gets caught in the copious fabric around your ankles…there is only one outcome – a huge splat.

So now when faced with the culotte as a fashion item, I find myself instinctively sitting in the no camp. Surely they are a total man-repeller designed to make any perky behind look gigantic and flat? Never mind the footwear conundrum – I don’t think my old Kickers would somehow cut it, although you never know….

So I set off on a mission to see whether they are, in fact, a wearable item of clothing and here are the results… brace yourself, it isn’t all that pretty!

First stop, Cos to try on their Cropped Cotton Trousers £59.00 and not a good start unless auditioning for a part in a circus troupe. 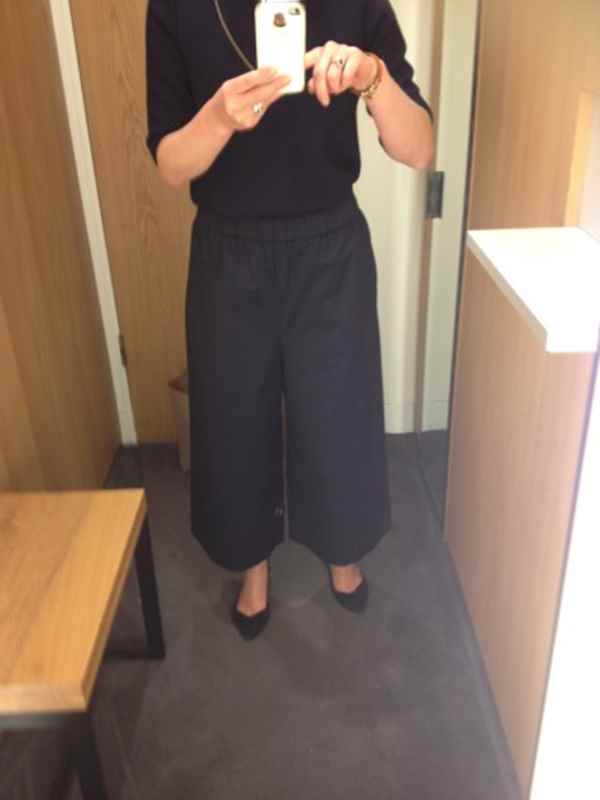 Then on to Reiss for a much dressier pair which would be suitable for going to a ‘do’. At £135 the Zodiac Pleated Culottes are very pricey and in champagne (they are actually slightly off white) not exactly the most practical or flattering colour and wow did I look matronly in them. Ok from the side view but not a viable option to skuttle around sideways like a crab while wearing them. I desperately wanted these to look amazing on and wanted to believe the website blurb about looking chic but really I just felt wide. These also come in black which would have been a more flattering option. 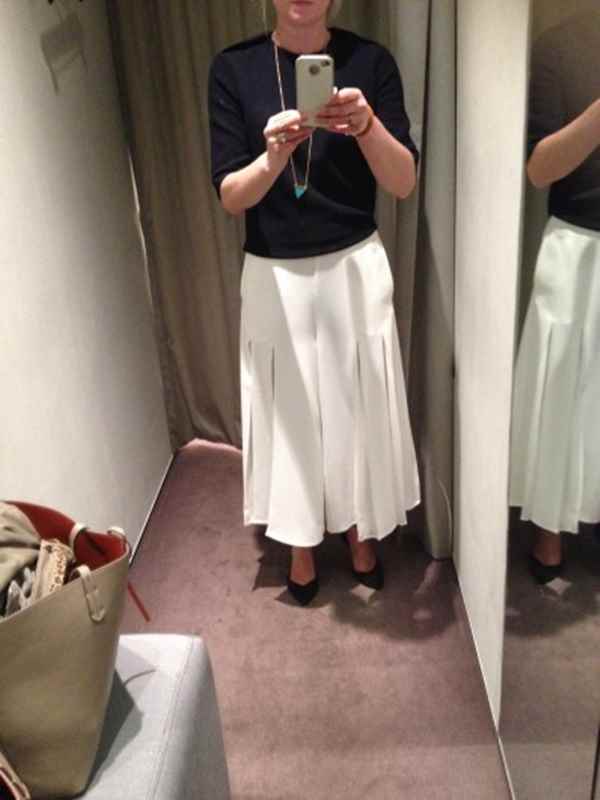 There are a couple of shorter options on the website which were not in store. Definitely a better bet for those of us who are more vertically challenged and would be good for a summer wedding worn with a jacket and heels.
1971 Filippa Stripe Short Culottes £110 and Filippa Plain Short Culottes in pomegranate £95.[column type=”one-half” fade_animation=”in” fade_animation_offset=”45px”] 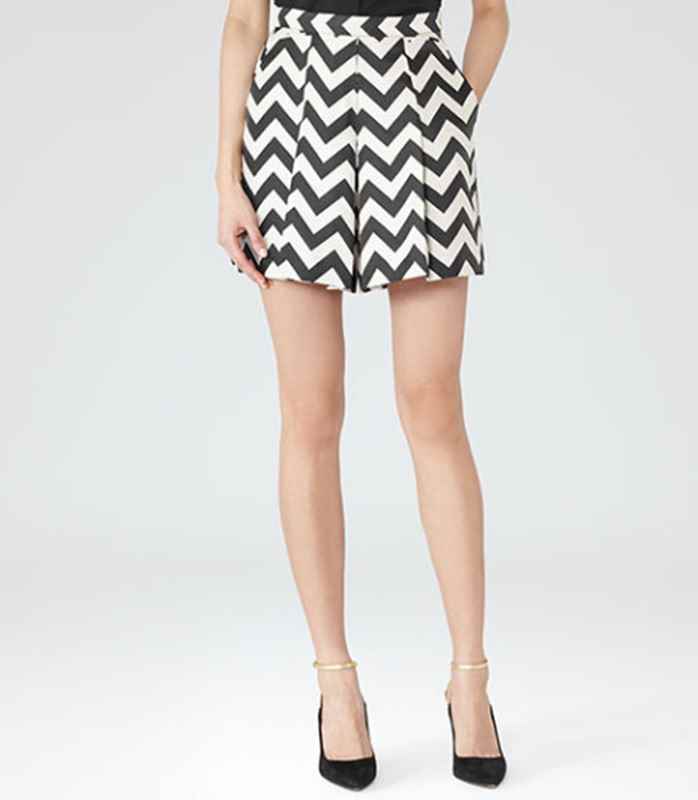 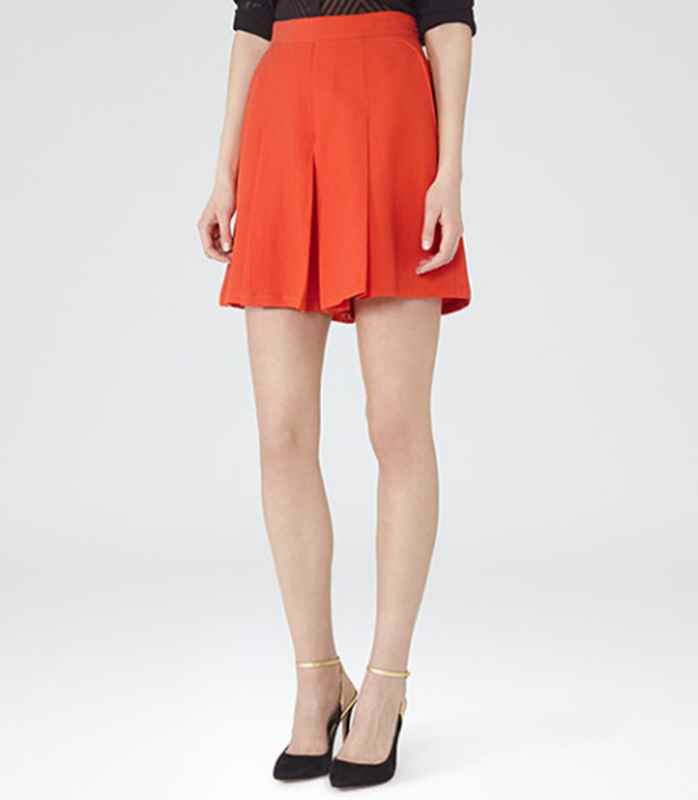 Karen Millen was my next stop and I thought that if anyone could sex up a pair of culottes it would be them. Alas their Navy Tailored Culotte £99 in a textured wool was just not for me either. Too boxy. 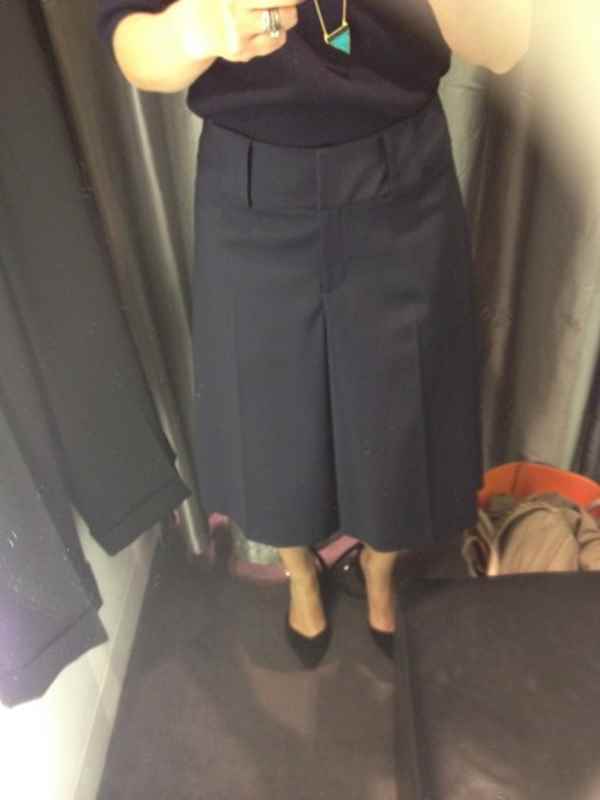 Never mind, ever onward and to Oasis to try on two very different pairs. One a soft black more workwear looking pair, ‘loved by Mollie’ (Macintosh) Tailored D Ring Culotte £40 and the other their Soft Iris Print Culotte £38. Judging by my husband’s reaction to the floral pair, they definitely are a man-repeller and I felt hugely frumpy – that is huge and frumpy in them.[column type=”one-half” fade_animation=”in” fade_animation_offset=”45px”] 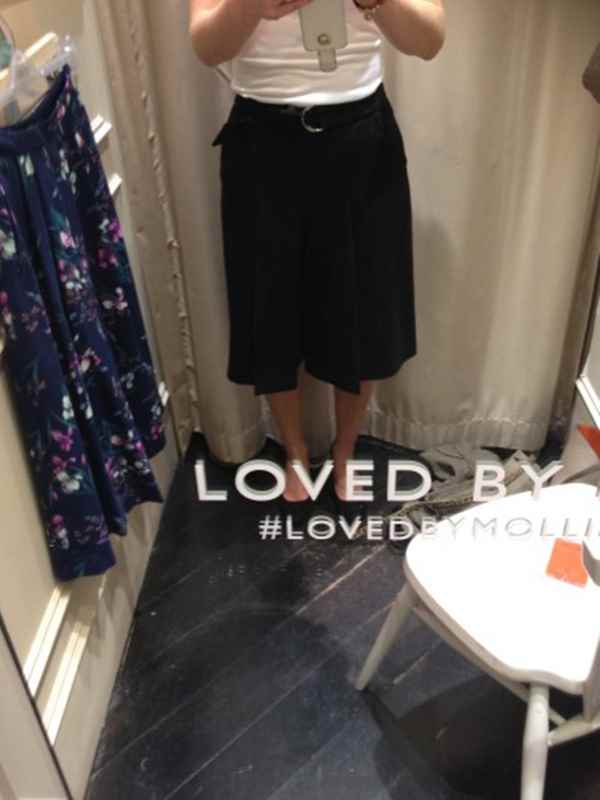 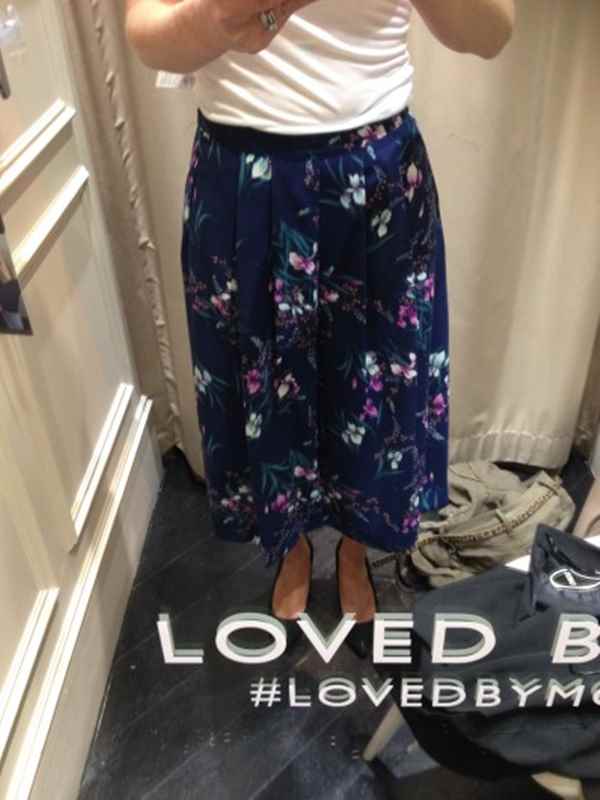 They do have a Short Culotte £30 and this comes in orange, navy blue and a violet colour. I really like this option and think it would be a versatile item you could dress up or down. 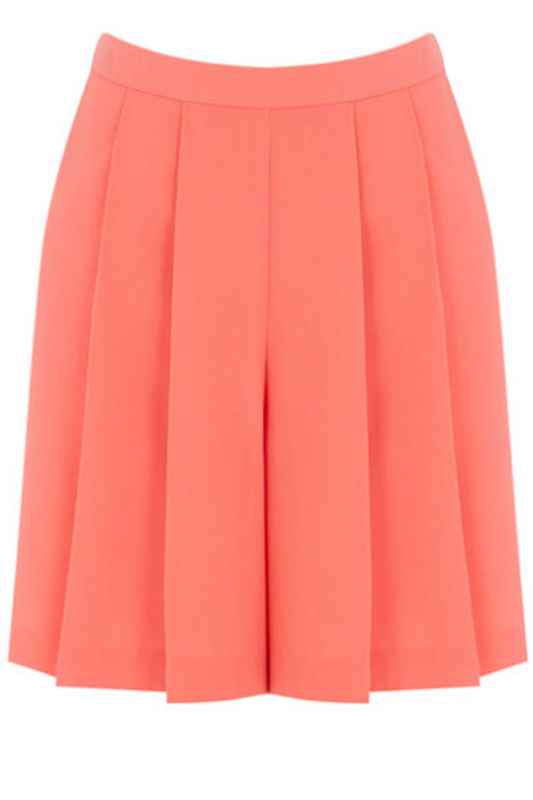 Topshop next on the list and typically the only pair I could find here was their white Faux Leather Culottes £36. Why oh why? I am clearly far too old for Topshop but I thought why not, for a laugh try these on. They have 5 stars on the website so clearly 1 person has bought them. So here they are… 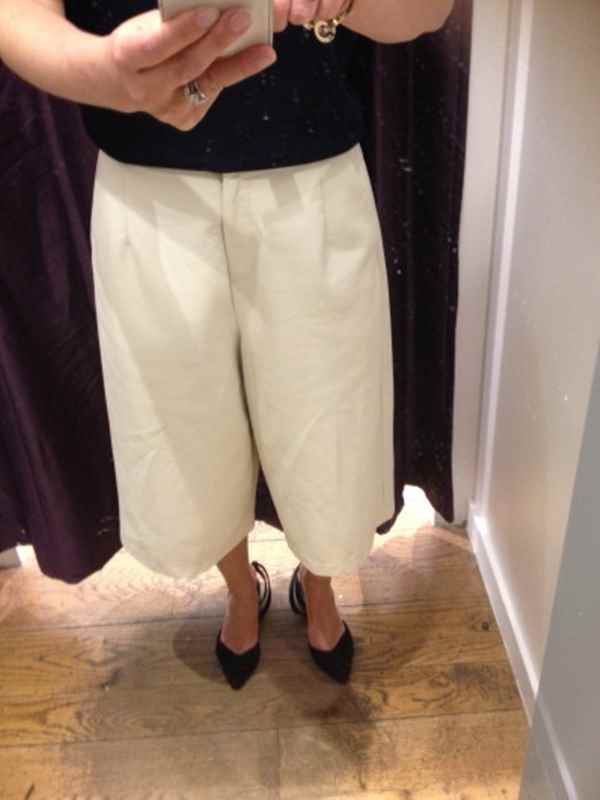 They also have several other pairs in print and plain but I feel a bit once bitten, twice shy.

Fortunately in the mid season sale mahem that was Zara, I couldn’t locate any culottes at all but rest assured they have several pairs on their website as well as some which look just like trousers. This Front Pleat Skort £29.99 looked the most flattering. 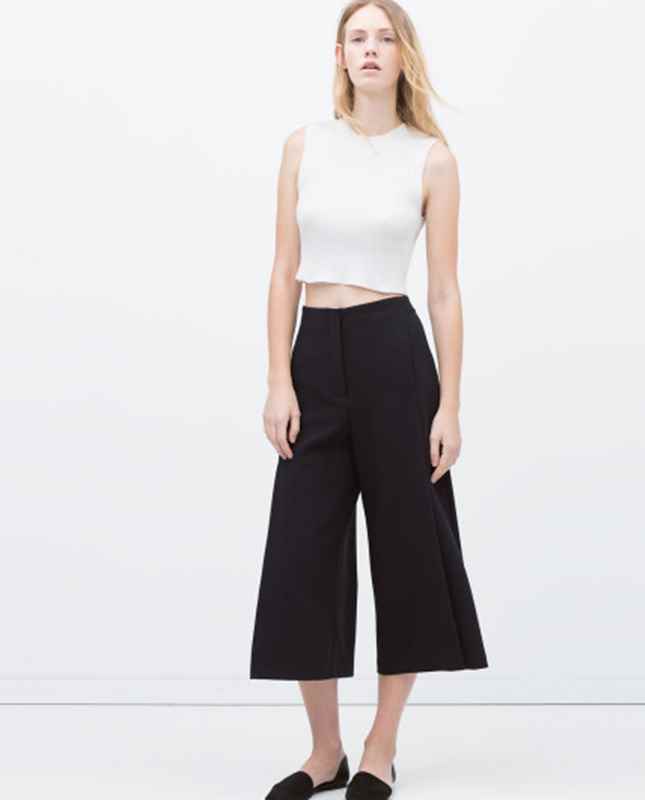 Whistles did not have any of their styles in my size thankfully but they do have plain and print options including these Denim Culottes £140 which would definitely tick off two of the season’s key trends. 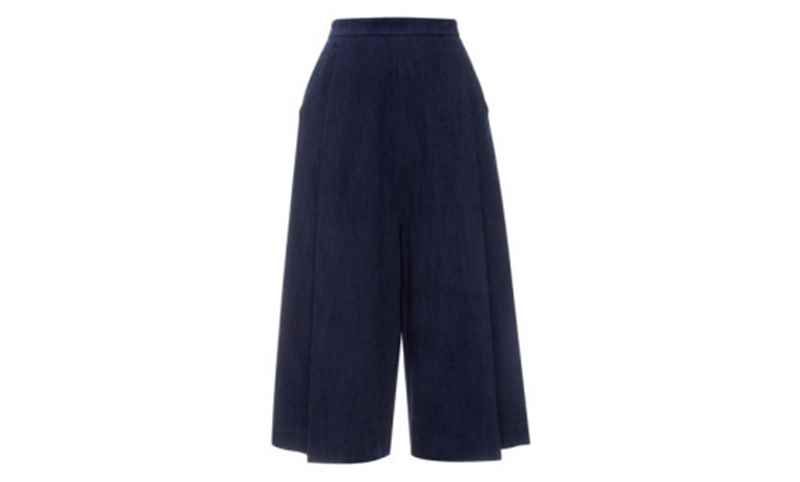 What I couldn’t take any photos of when I was out and about was of my rear in said culottes and quite frankly that is a good thing because it was not a sight I would cherish having out there for all to see. Queen may have been right when they sang that fat bottomed girls make the world go round, what they didn’t say was FLAT bottomed girls. Need I say more.

So for me long culottes are a total no-no but a large part of the problem is that at 5ft 2″, the odds are already stacked against me ever looking good in anything hitting my mid-calf. A pair of short length culottes would probably have definitely done the trick but for most people the culotte will not be the most wearable trend out there for this season.

Styling wise, you need to counter-balance the volume on the bottom half with a fitted top half and really I think you need a pair of heels unless you are already Amazonian in stature – doesn’t need to be stilettoes, wedges or a block heel would do the job.

Having spent the best part of a gloriously sunny afternoon feeling fat and frumpy I comfort bought a pair of lovely Metallic Cap-Toe Espadrilles from Zara £39.99, after all shoes can’t make you feel fat can they? 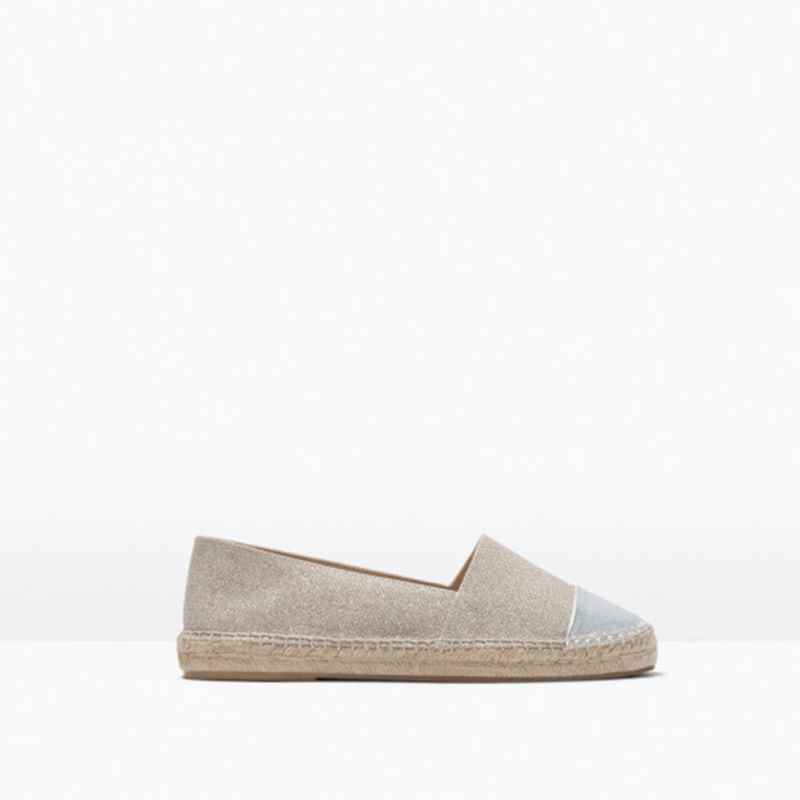